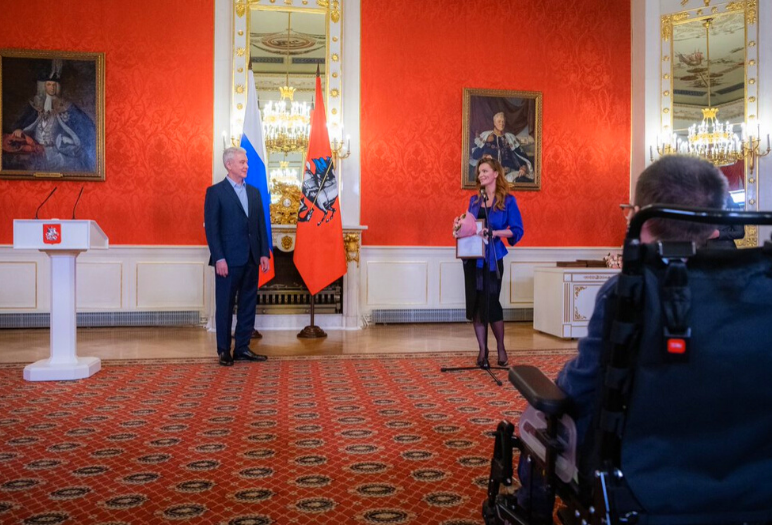 On February 27, the World Day of Non-governmental Organizations, Mayor of Moscow Sergei Sobyanin presented gratitude to the leaders of the capital’s NGO for the implementation of socially significant projects and civil initiatives. The award ceremony took place in the White Hall of the Moscow Government.

The International NGO Day is becoming more and more significant every year. In Moscow, there are about 30 thousand non-governmental organizations, which every day have more and more importance in the life of our city. This is a special sphere, which has special significance. You care about children who are left without parental care. You care about disabled people, veterans, pensioners, all those people who are in trouble, – Mayor Sergei Sobyanin said.

During the meeting with the mayor, Moscow public activists put forward several initiatives that were supported by the mayor of Moscow. Thus, representatives of non-profit organizations proposed to transfer the subsidies of the Public Relations Committee of the city to the status of grants of the Mayor of Moscow. It was also proposed to increase the grant fund of urban NGO support from the present 270 million rubles to 350 million.

– I think that the volume of subsidies should be 400 million rubles, – Sergei Sobyanin said in response to this initiative.

The allocation of subsidies for the implementation of socially significant projects on a competitive basis is one of the most effective programs to support the third sector of Moscow. Only last year the volume of such subsidies amounted to 273 million rubles, and 697 organizations took part in the competition, among which 181 NGO projects received support.

– The mayor promised to work out an initiative related to the establishment of the title of “Honorary public figure”, – said Karina Smirnova, director of the ANO “Young Naturalists’ Club of Zelenograd”. – First of all, I want to thank Sergei Sobyanin not for this high award, but for the changes that have taken place recently in the city. Moscow has changed, has become comfortable for life, truly spiritual. Resource centers of NGOs, including Zelenograd, are engaged in promoting the “Cozy Moscow” portal, and this fully corresponds to what has been happening in the city recently. On World NGO Support Day it is important to note that in many countries the third sector makes a significant contribution to the development of the economy. And in Moscow, with serious support of the city, NGOs are actively developing and effectively working for the realization of social tasks. And, of course, many thanks to my team and the Zelenograd Resource Center of NGOs – without them we would not have managed to achieve such results.